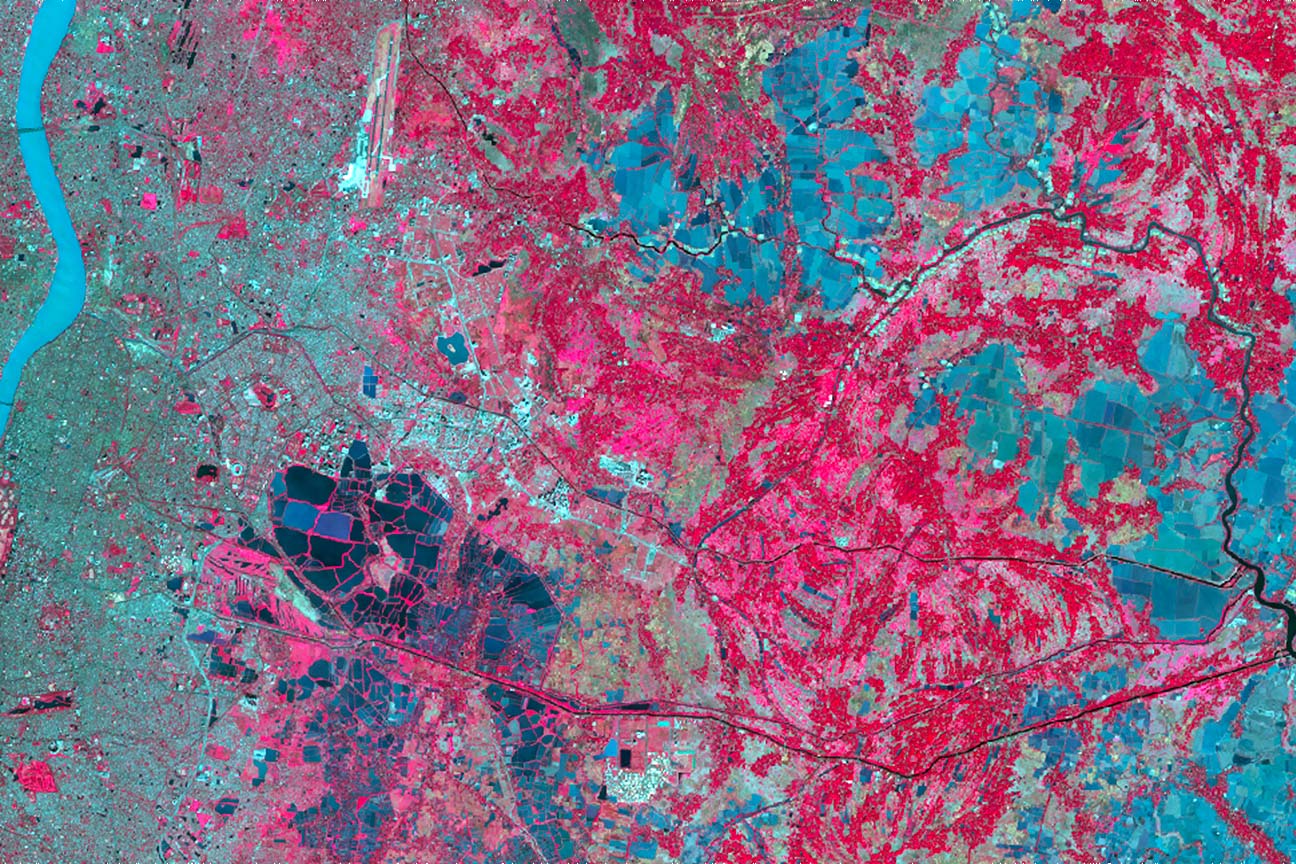 Online synchronous tutoring allows for immediate engagement between instructors and audiences over distance. However, tutoring physical skills remains challenging because current telepresence approaches may not allow for adequate spatial awareness and viewpoint control of the demonstration activities scattered across an entire work area and the instructor’s sufficient awareness of the audience. We present Asteroids, a novel design space for tangible robotic telepresence, to enable workbench-scale physical embodiments of remote people and tangible interactions by the instructor. With Asteroids, the audience can actively control a swarm of mini-telepresence robots, change camera positions, and switch to other robots’ viewpoints. Demonstrators can perceive the audiences’ physical presence while using tangible manipulations to control the audiences’ viewpoints and presentation flow. We conducted an exploratory evaluation for Asteroids with 12 remote participants in a model-making tutorial scenario with an architectural expert demonstrator. Results suggest our unique features benefited participant engagement, sense of presence, and understanding.

Asteroids is a novel approach for remote physical demonstrations using a swarm of telepresence robots.
A) With Asteroids,remote audience members can inhabit and control small robots on a workbench to follow the instructor’s guidance or roam around looking at activities at various locations and scales.
B) And, a demonstrator can physically interact with the remote audience and use tangible artifacts to control the flow of the demonstration.

Elements of a physical skill demonstration that uses the Asteroids approach.
A) a workspace with multiple (e.g. soldering,assembly, and 3D Printing) zones managed by the demonstrator
B) Asteroids robots
C) Zone tokens
D) Command tokens
E) amember of the remote audience 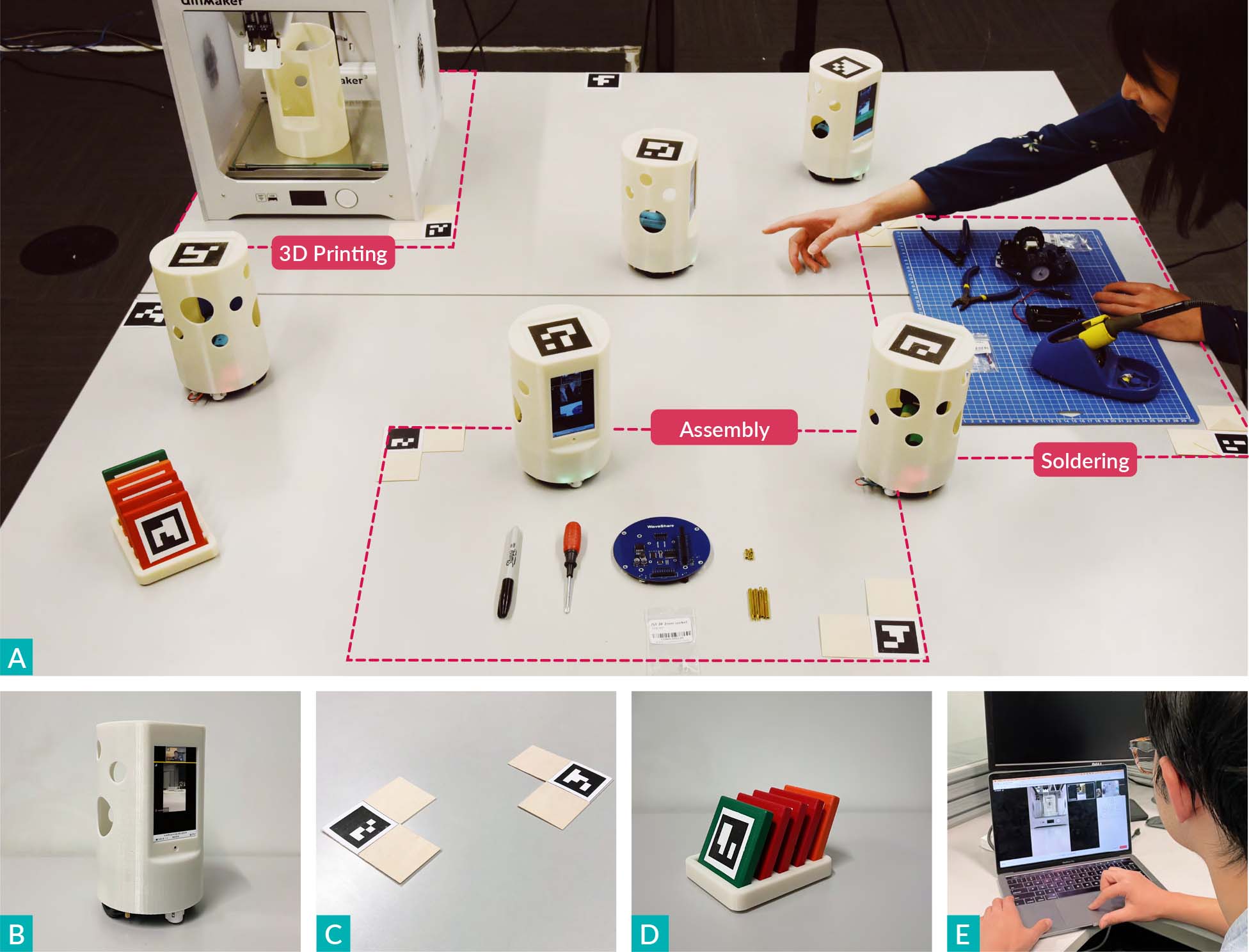 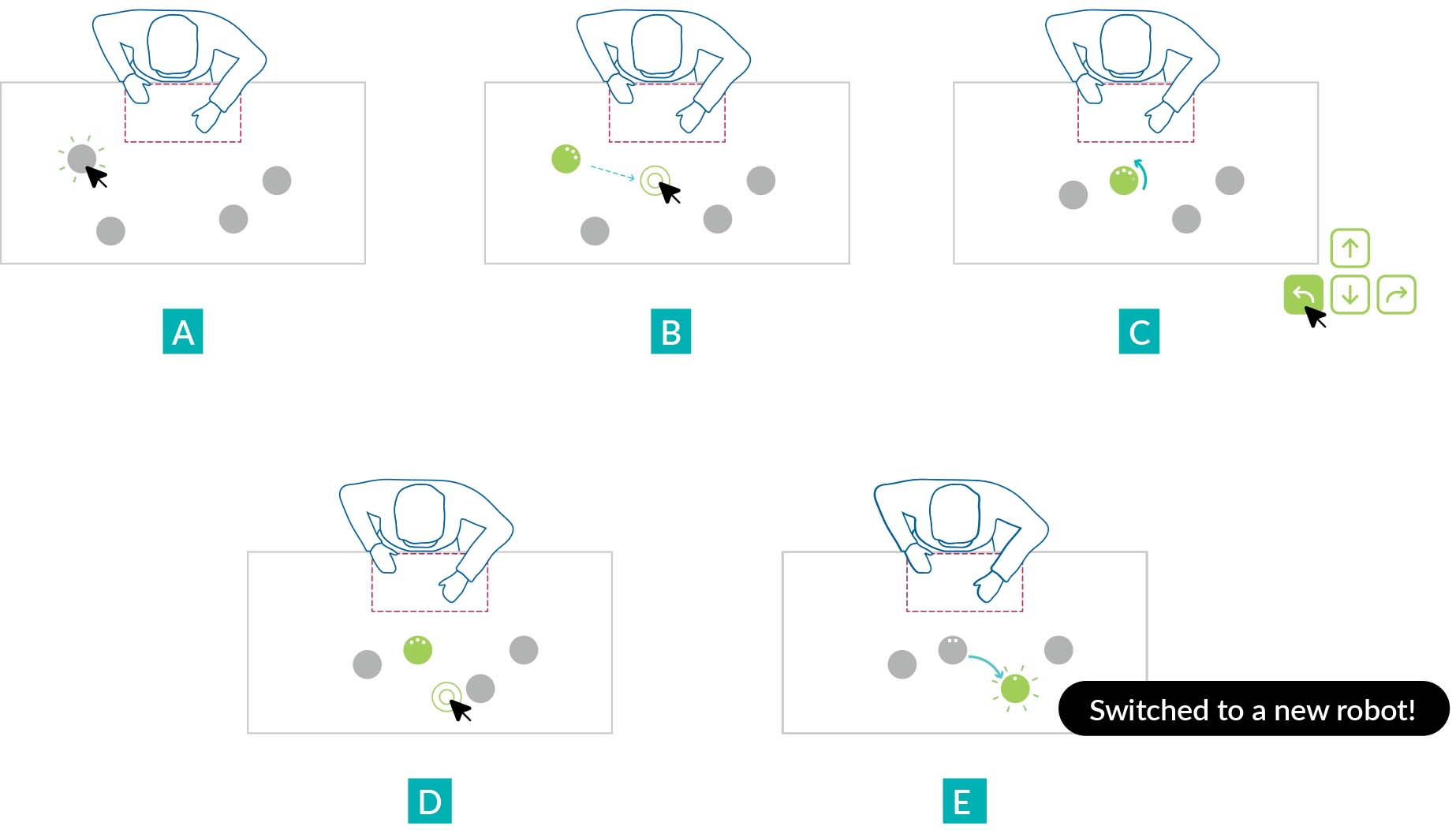 Asteroids offer five different tangible interactions for instructors to control the flow of the demonstration: A) Demonstrator scan pick up and relocate Asteroids robots. B) Using a red Command token, the demonstrator makes that robot stationary, focusing on a single viewpoint. C) An orange token moves every audience member to that robot. D) The green token indicates a region of interest and makes all robots face that spot. E) Additionally, demonstrators can rearrange the work zones using a pair of zone tokens. 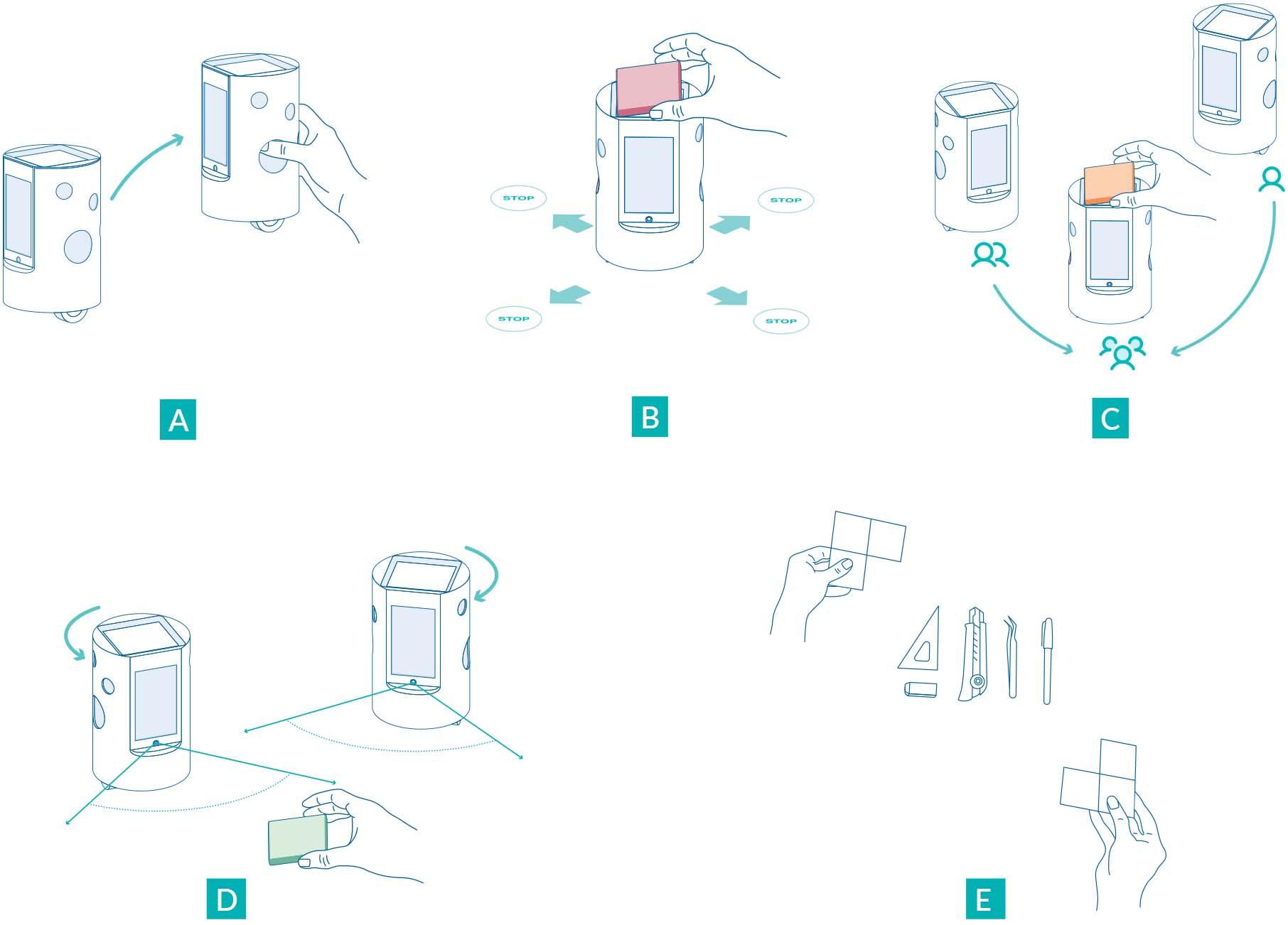 A demonstrator notices a change in audience interest and adapt the demonstration flow. A) and B) an Asteroids robot moves away from the soldering iron and moves towards the 3D printer, as the controller of the robot is more interested in the 3D printing process. C) Noticing the movement of this robot, the instructor adds a robot and use a red command token to pin this viewpoint inplace.

An audience member follow the instructor’s work in multiple areas. A) observing soldering in the zone for making individual parts. B) observing robot assembly in the assembling zone. 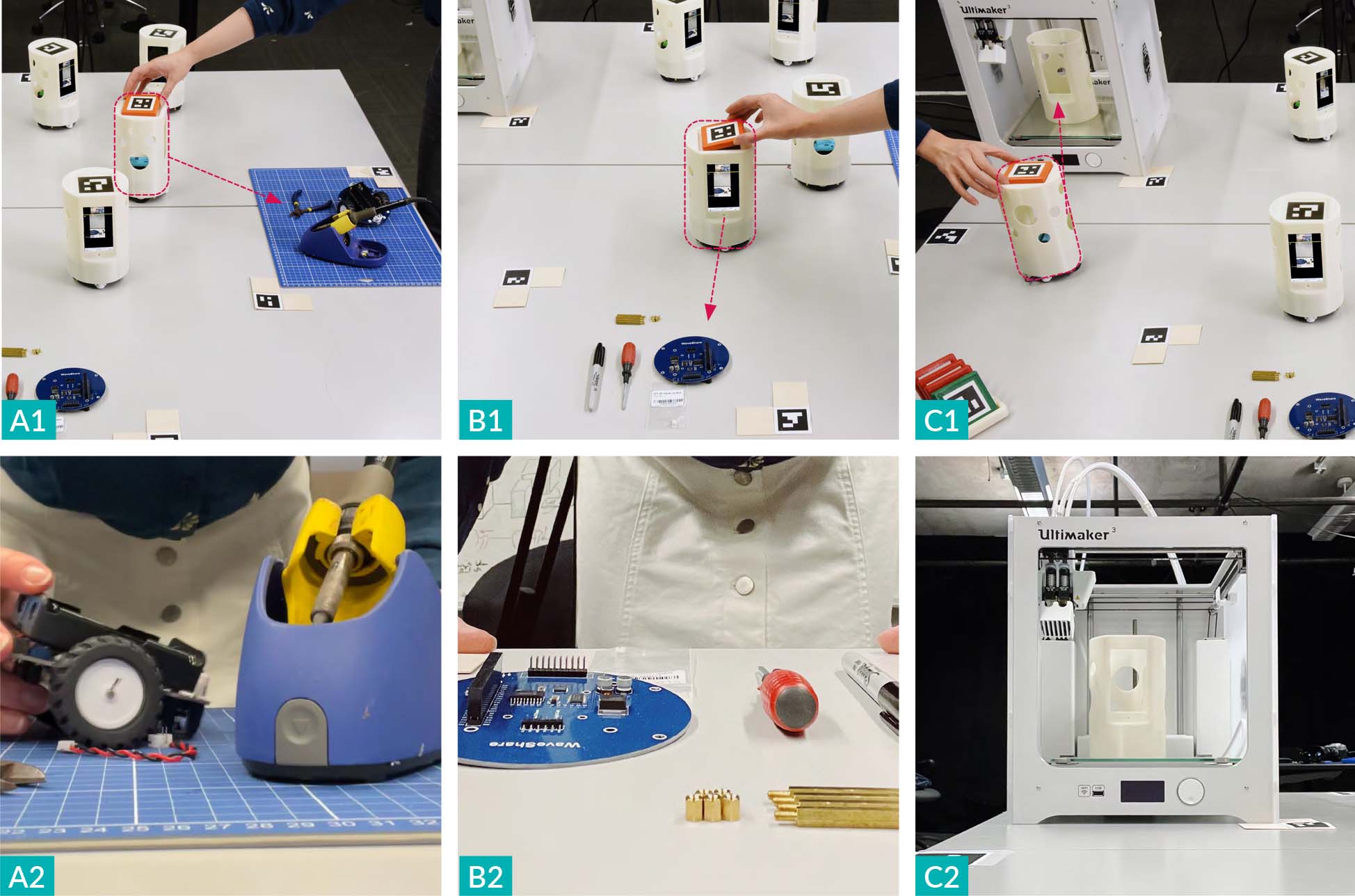 With Kolkata being one of the most populous cities in India, the sundarbans being the largest tidal mangrove on earth, the wetlands being one of the best natural sewage treatment worldwide, we start to think what we can do as urban designers.

Once we have identified the numerous connections between the four sites and the underlying social-economic injustice,we played around with our strips to see the possibilities.

What if the landscape of one site gets transplanted to another?  We can see here that the relationship between the urban settlement and wetlands gets inverted, and the wetland landscapes grows into the city instead of the other way round. So what would this actually mean? Would it mean a new series of  waterfront public spaces, a new typology for urban agriculture, or a new relationship between productive and consumptive landscapes?

Or what if we reassembled the four strips all together?

What if the species of the sundarbans can assist kolkata city in the biological system, with the mangroves preventing the floods and oysters purifying the water?

What if new town construction stops filling up the wetlands but develop in a more sustainable way? What if the IT industry brings technology into the rural villages to assist them with irrigation infrastructure?

What if the sundarbans start to develop in the same density level as the kolkata city? Right now only 39% of the fishing resources are being utilized, what if we tapped into this vast potential resource?

The what if possibilities for this transection are endless, and we want to contribute as urban designers to establish a gradient along this transection that is able to thrive on all levels. 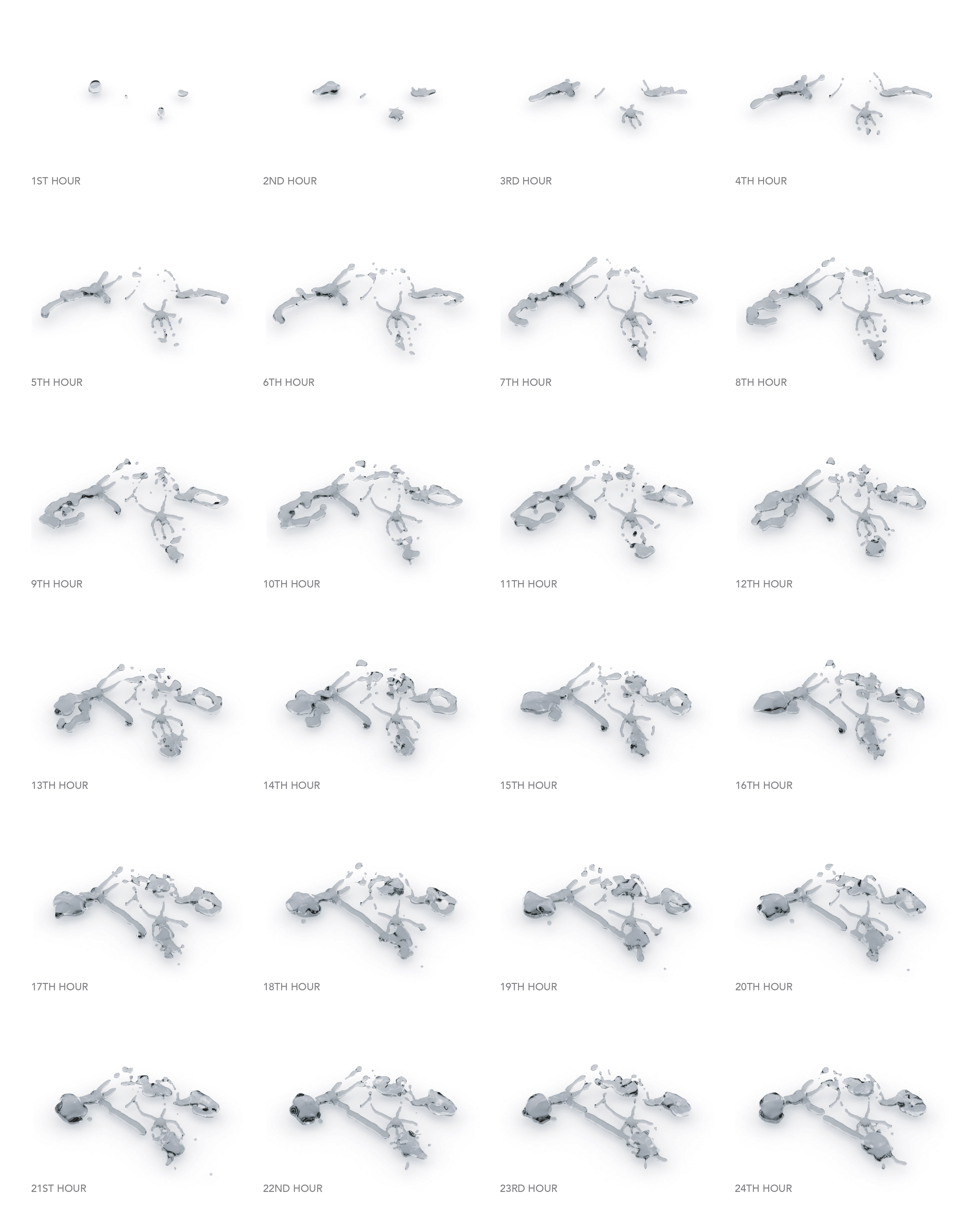 It is intuitively reasonable to have the view that denser urban areas are more susceptible of becoming epicenters of COVID-19. Because this is what the mass media and government officials tell us. As the hardest hit city in North America, the density of New York City is often highlighted as the one of the major reasons behind its COVID severity. However, based on our analysis, there is no correlation between urban density and covid severity.

Here's the built FAR map overlaid with case rate, as we can see, the densest built area in New York City such as lower and midtown Manhattan do not have the highest COVID case rate.

Since COVID is transmitted through human droplets, we looked at another component population density. Surprisingly, when the base map is changed to population density, there is still no clear correlation between the two.

As it is shown, the more saturated violet regions have smaller dots, which shows that higher education is potentially correlated with lower case-rates.

In linear regression analysis, education proved to be the strongest correlate of all the variables we explored, by far. As the level of education increases, the case rate decreases. With points tightly scattered about the regression line, and high R-squared of 0.7. This is consistent with the observation from the map.

We also examined the relationship between income per capita versus case rate. From the images below we can see that income and case rate are inversely proportional.

Pisciculture and floriculture consumption are of vital importance as one fulfills Kolkata’s average residents’ physical need in food and the latter supports their social need in religion practice. 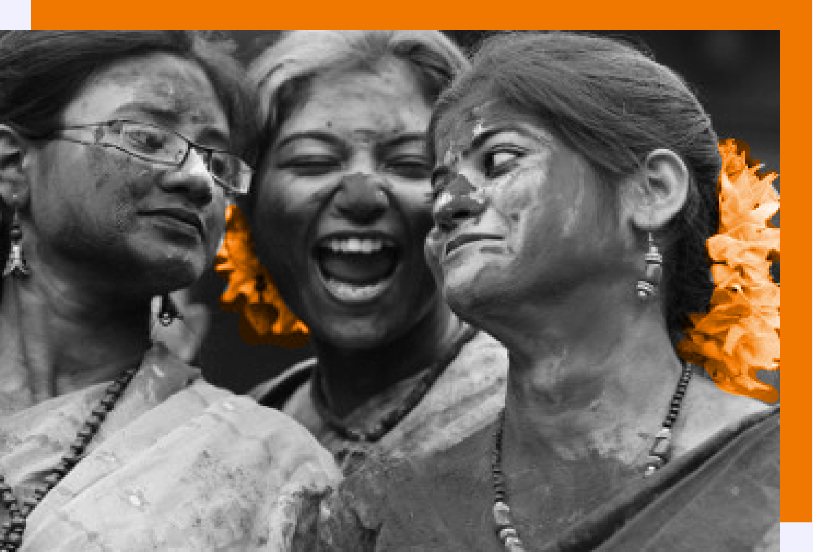 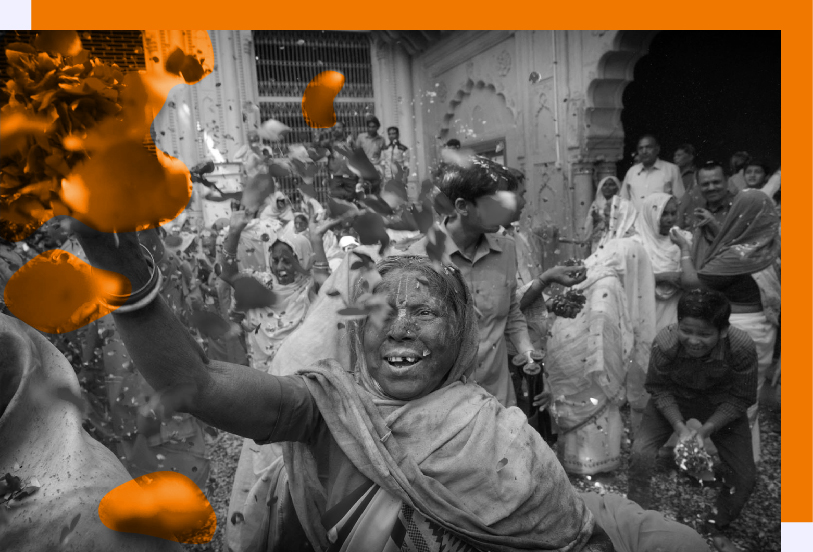 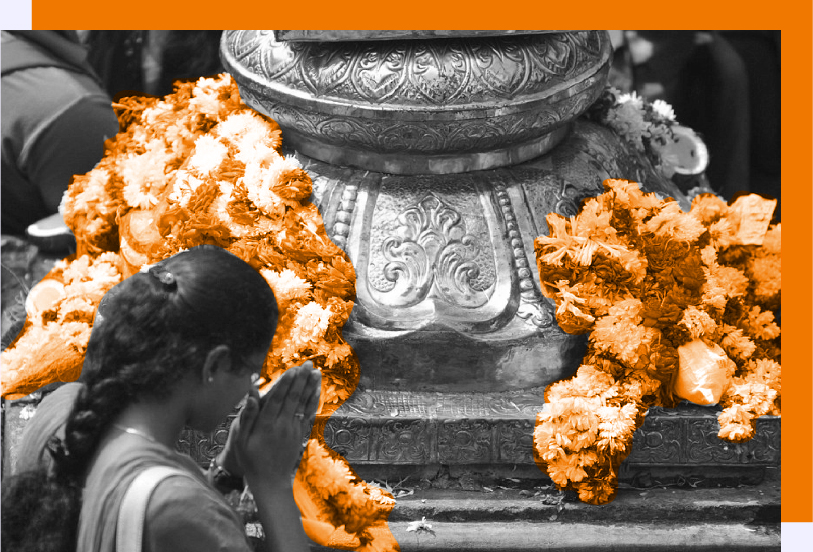 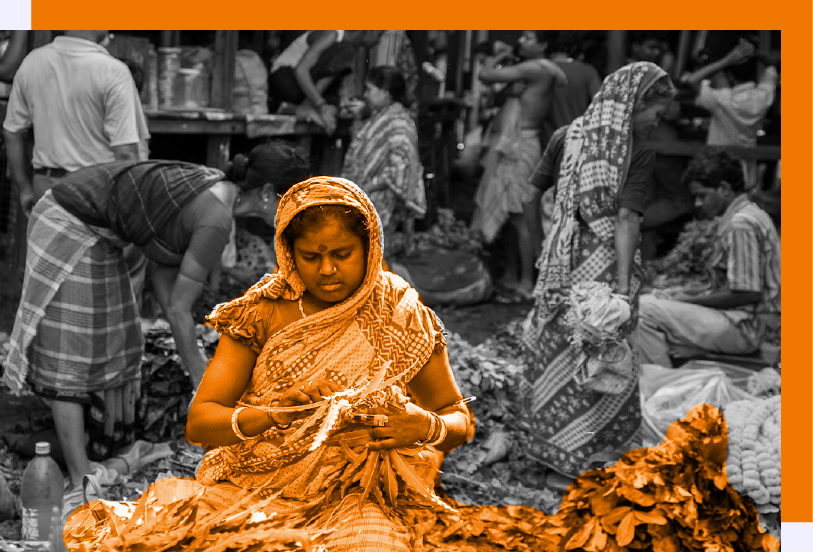 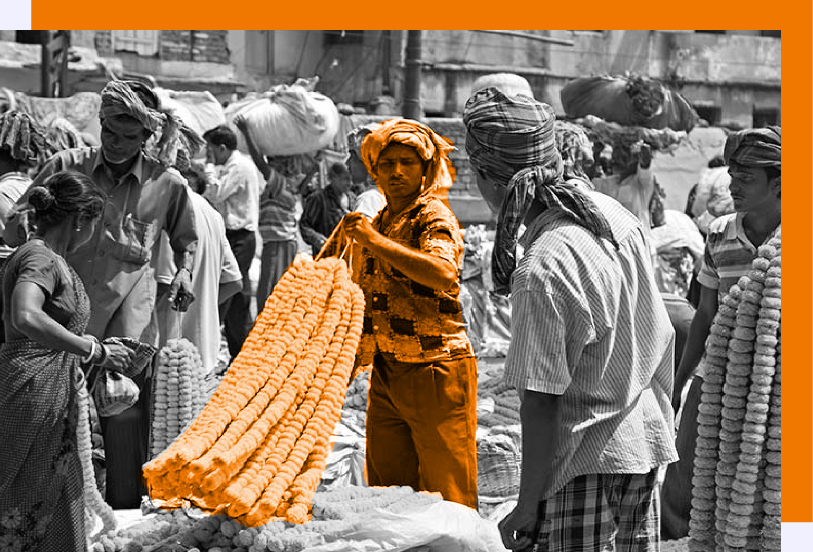 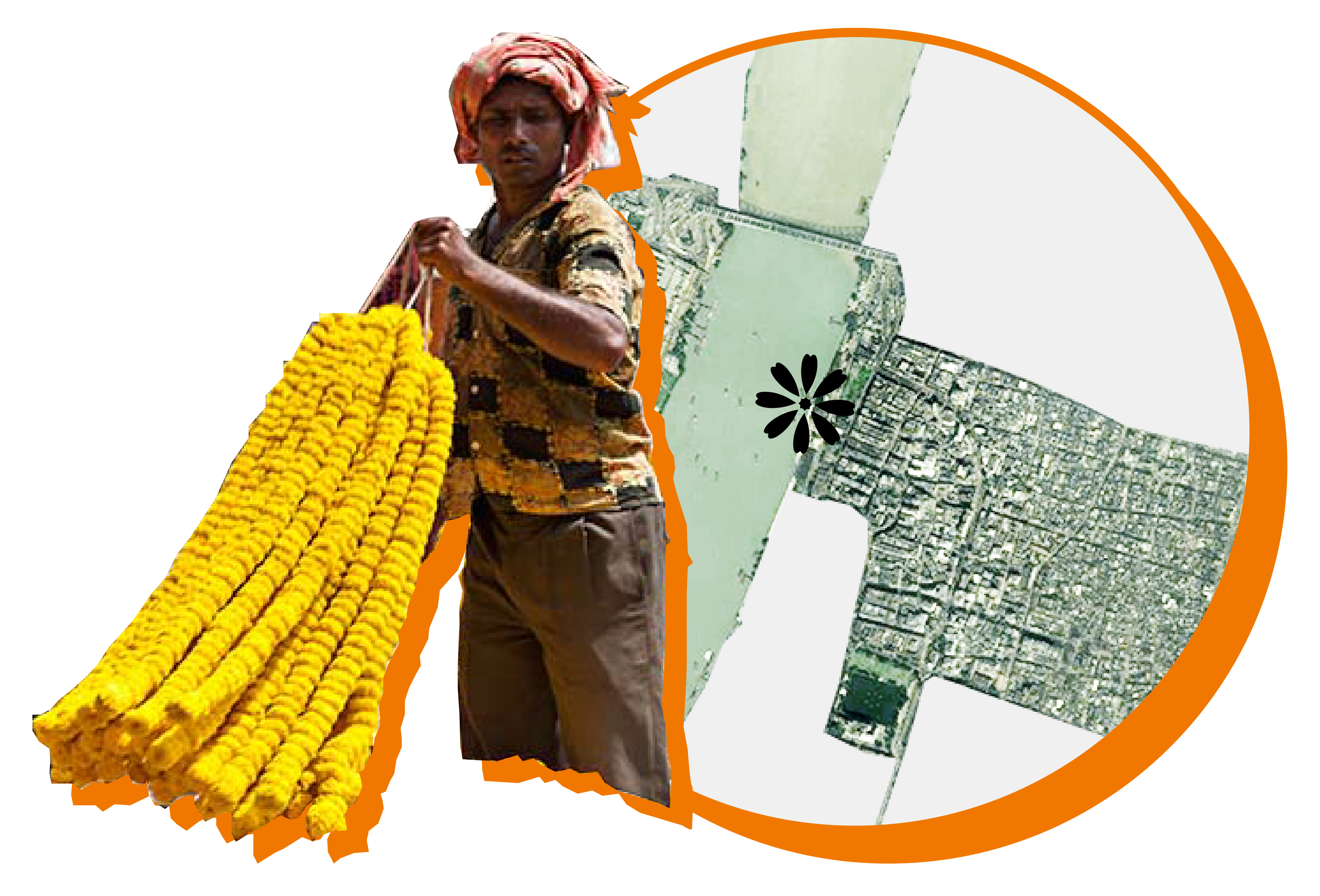 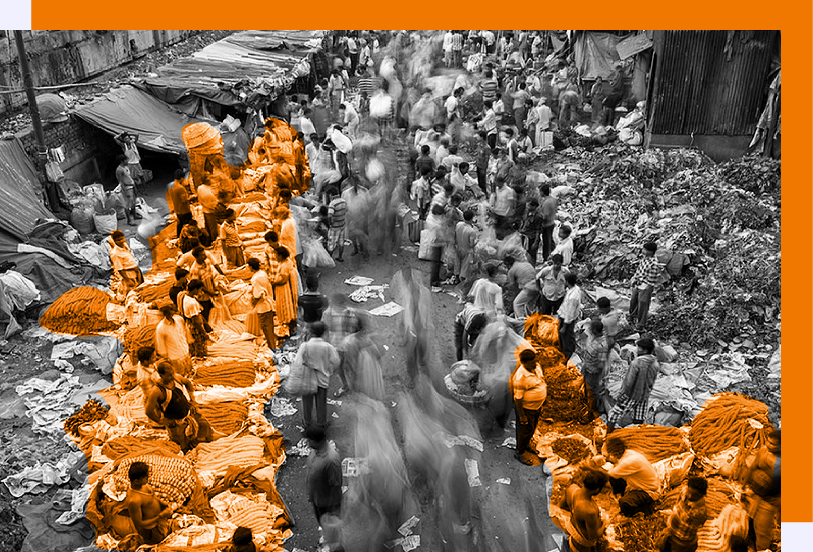 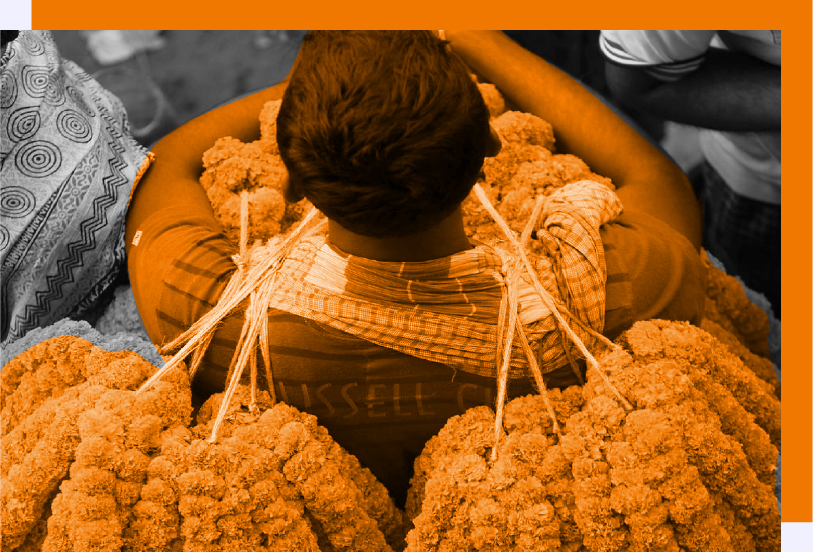 As the core of religious rituals in Kolkata, up to 1,500 tons of fresh-cut flowers are exchanged at Kolkata Flower Market daily before being distributed to retailers and temples. Nonetheless, major flower suppliers travel up to 12 hours to reach Malik Ghat Market, in this primitive transportation process, a large portion of flowers are withered and thus wasted. 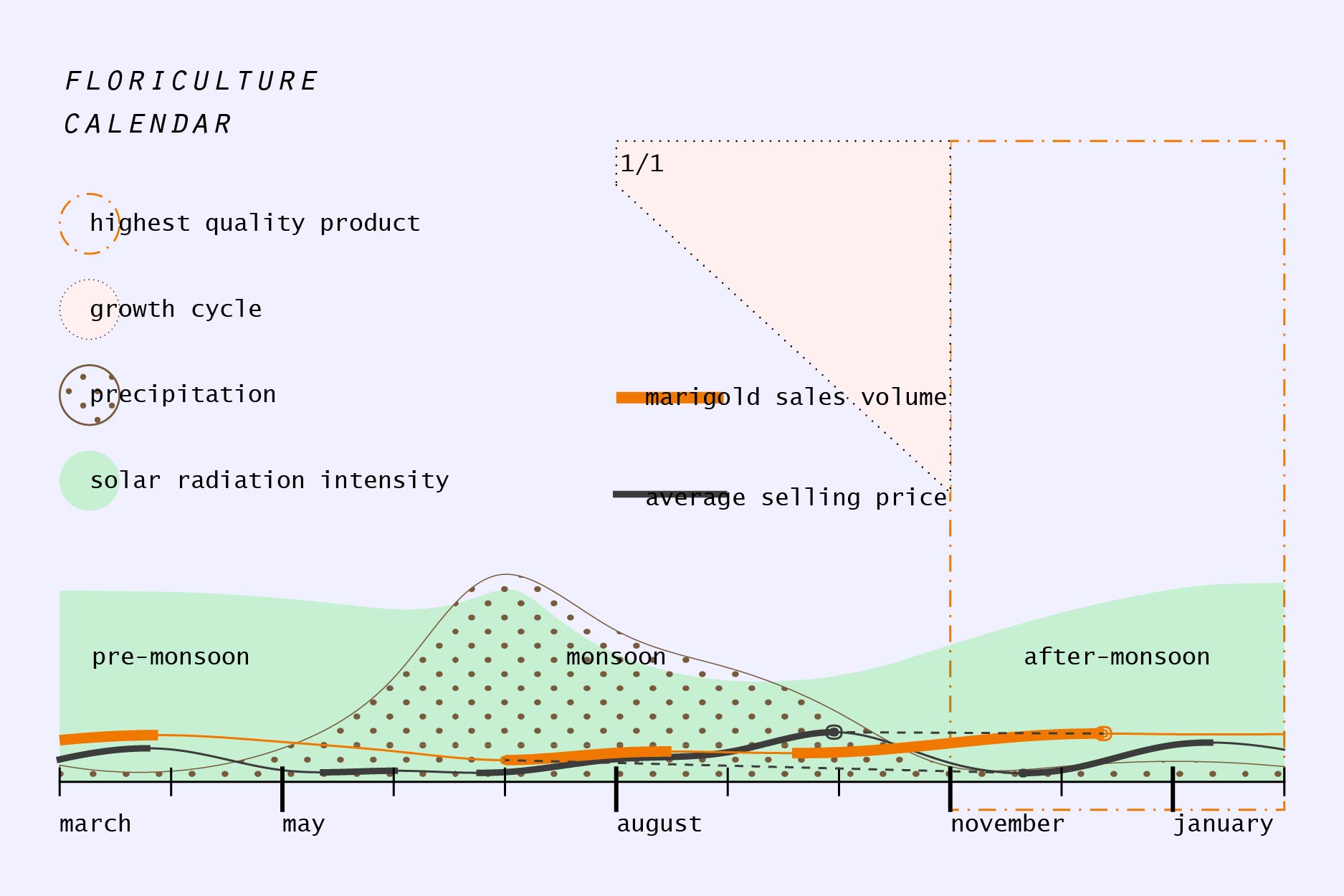 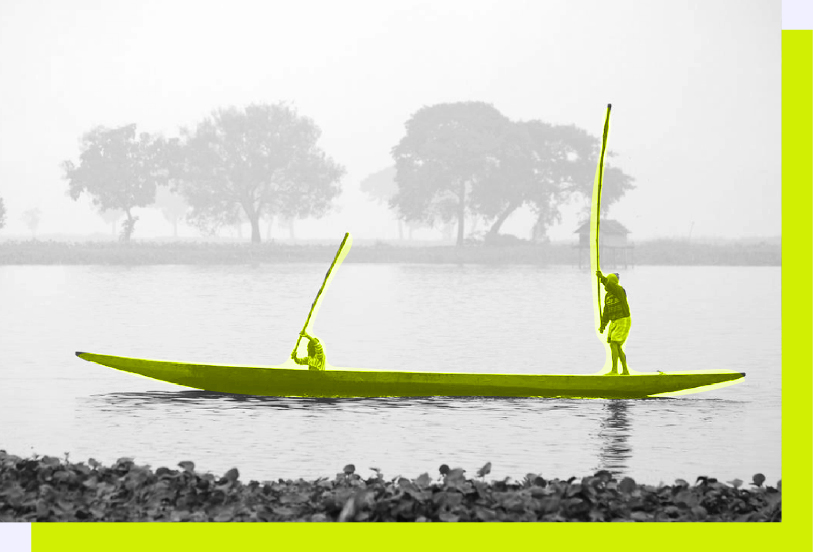 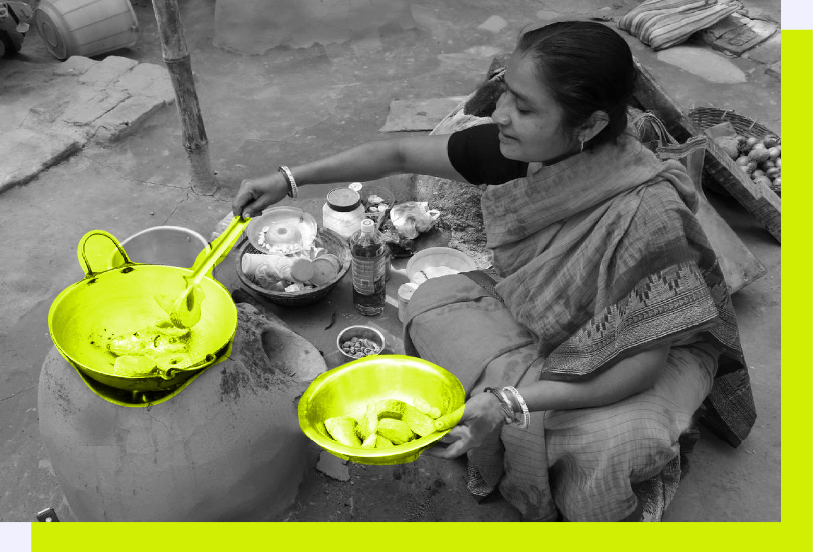 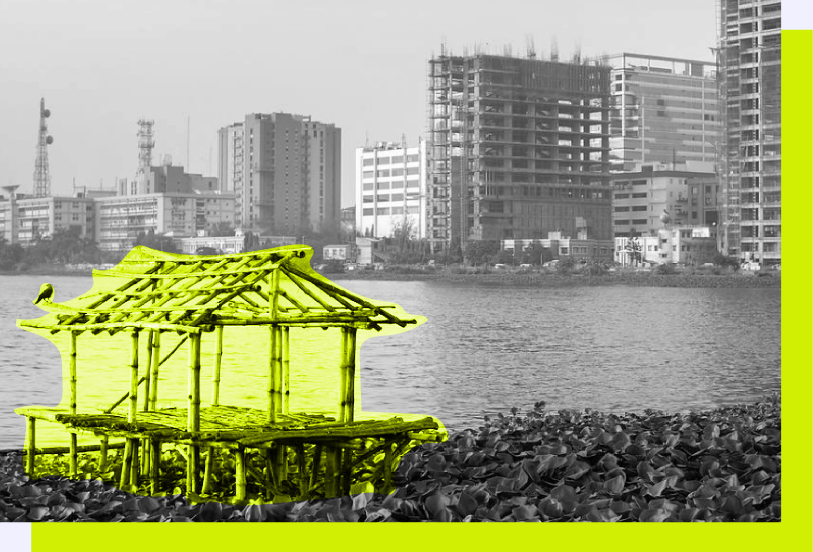 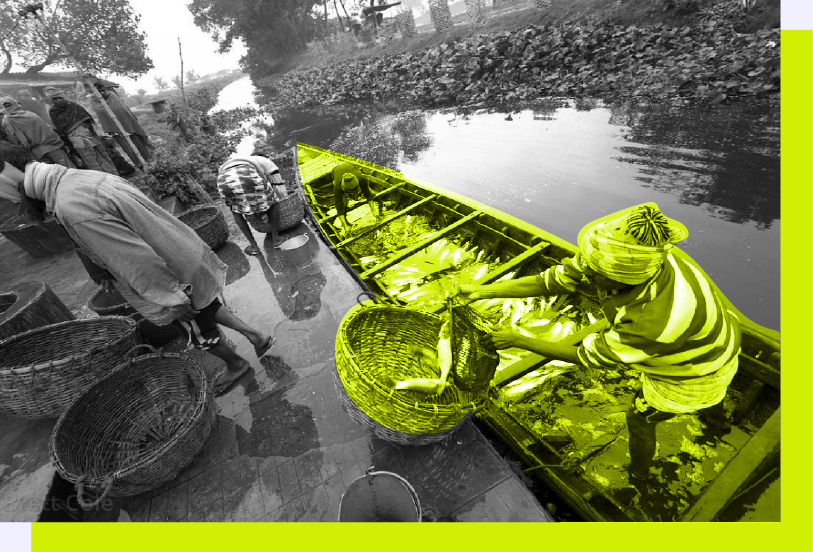 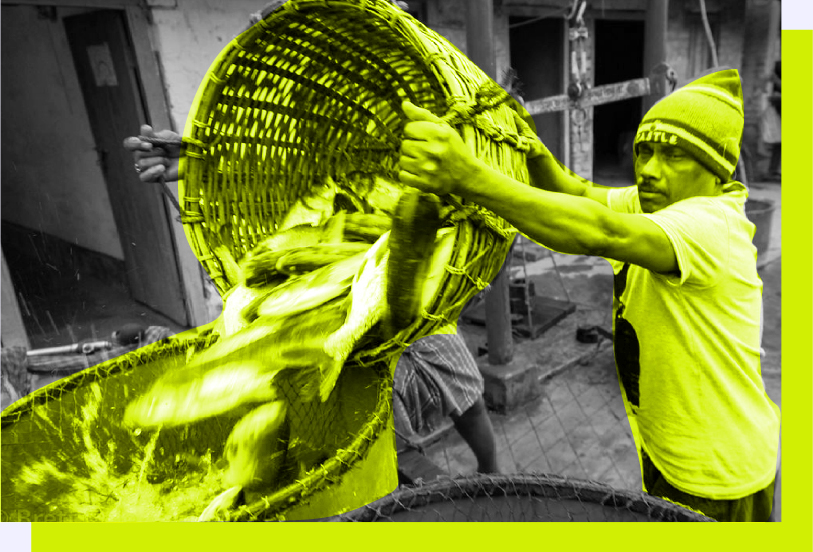 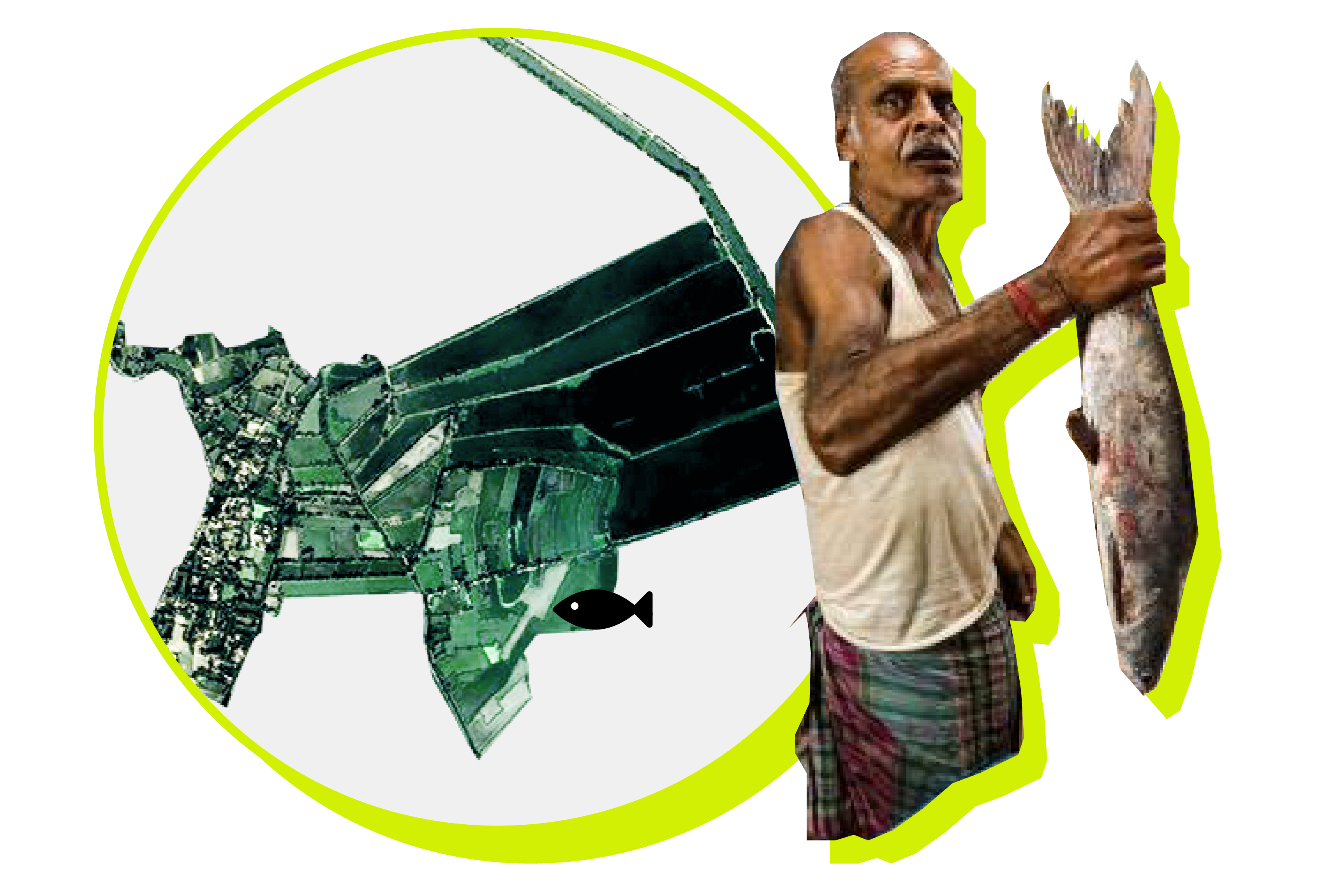 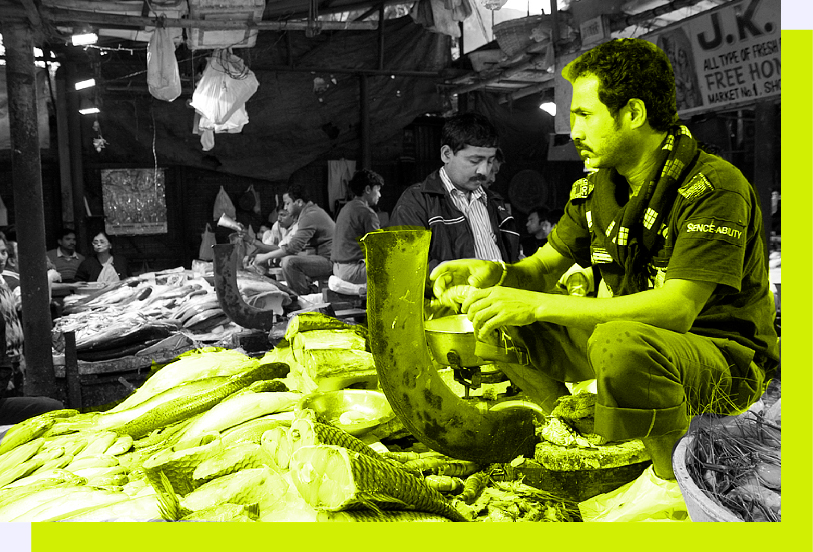 Currently, the wetlands directly supply 13,000 tons of fish to Kolkata annually while treating 60% of its sewage water. However, pisciculture is losing its people to other industries as fishermen struggle to make a profit from the shallowing ponds caused by city pollution.

While indigenous ice making has long been a tradition practiced by the Calcuttans. Yet, it is the scarcity of ice which limits the distance and time allowed for fish and flower transportation/storage and constrains the development of by-product industries in Kolkata. 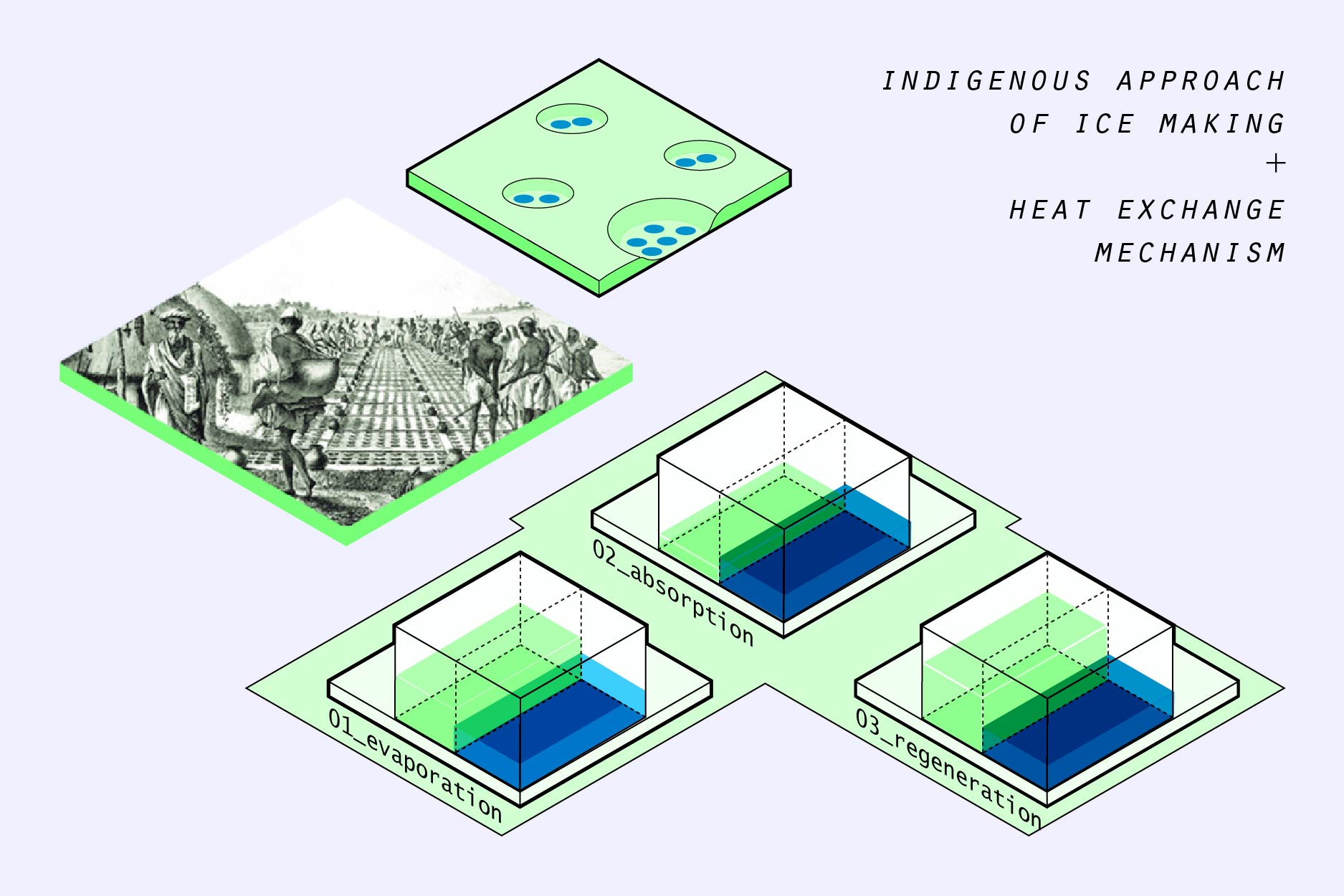 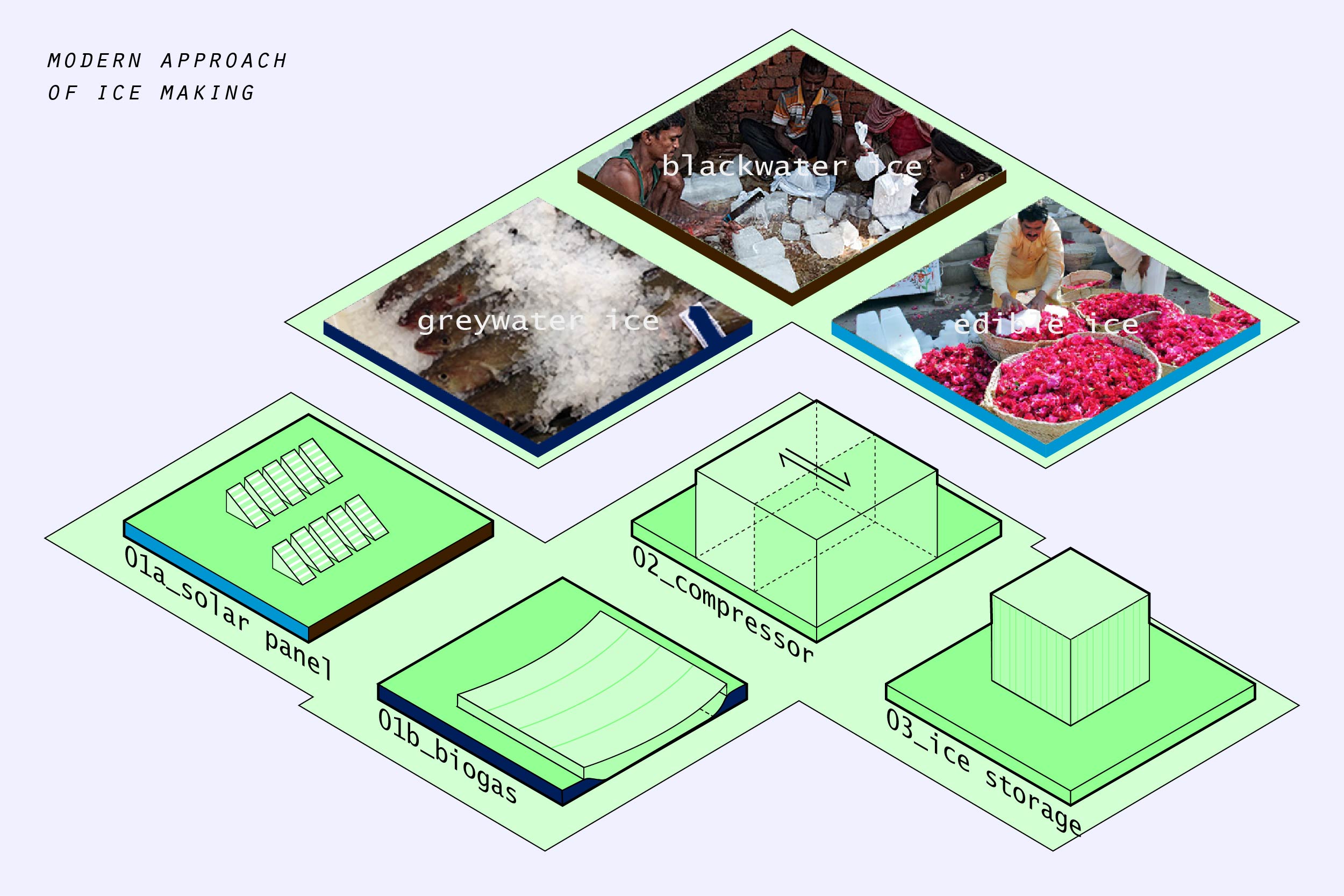 Inspired by the natural sewage treating system and the different levels of water exchanged in the wetland, our proposal challenges the conventional way of ice making by introducing ice of varied qualities, catering to the different needs of environmental cooling, fish/flower transportation and human consumption.

As temporality is a unique aspect of Kolkata, an area prone to monsoons, our project aims at transplanting the agricultural calendar into physical design interventions. By overlaying cycles of pisciculture, floriculture and ice with natural rainfall, solar radiation and temperature patterns, we are introducing three critical points on the hydrological system for further elaboration.

Building compelling augmented reality (AR) experiences is challenging due to designers inability to assess how uncontrolled contexts can influence the user experience.
Current approaches include capturing the end user’s environment through imagery or video; and building mini-size studio-interactive spaces to emulate AR environments. However, the former approach can raise privacy concerns and the later approach involves physical setups that are costly and time-consuming.
‍
We propose a non-intrusive, low-cost approach that supports rapid iterations for AR designers through gathering data from crowdworkers in a privacy friendly manner. 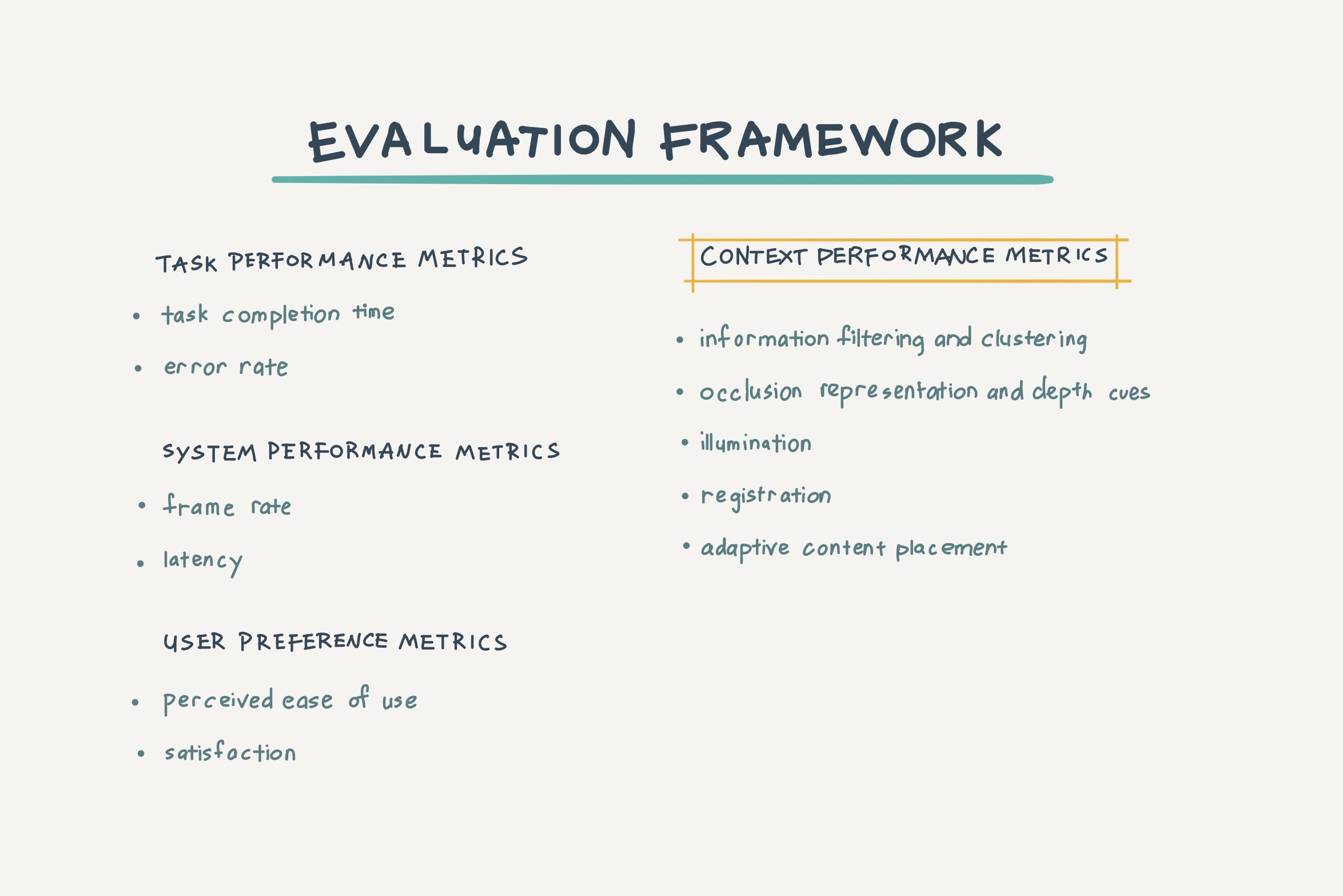 A augmented reality prototype is being tested is different scenarios.

The results reflect on the dashboard in real-time.

Back to research projects